Self-submits: there are a whole range of opinions on this one!  A self-submit is when you scan (or scour) the casting websites (in NYC, there is NY Casting – or LA Casting on the west coast; Actors’ Access, and Casting Networks, to name a few) and they often have “ads” in which a casting director/company/filmmaker would post a breakdown for actors (parents) to submit themselves for a role.  These can range from print opportunities to student films to indie productions that want to save money by doing the casting themselves – and one friend (shout out!) submitted her son for a role in a film that was released at Sundance and received wide acclaim – score!  So honestly, there can be some cool stuff out there.  We have done some self-submits in the past that have resulted in auditions and bookings, and my daughter has worked on two Columbia MFA films, which were great experiences.  There are also casting calls for extra work, which I addressed in a previous post.  Allegedly, politicians have used casting websites (or companies) to fill audiences when necessary.  I’m thinking the actors probably signed NDAs (non-disclosure agreements: they cannot talk about it).

Anyway, should you self-submit?  My first nugget of advice is: always ask your agent or manager.  Some agents and managers may feel strongly about this, and you should know their opinion right off the bat.  Personally, we tried a few when we first started, and I sort of gave up looking.  Especially when your kids are older and have more school and extra-curricular commitments, it might not be worth it to do castings, auditions, and jobs in addition to what your agents send you.  The student films my daughter worked on were in the summer, and didn’t interrupt any of her scheduled activities.  I found the students to be professional and kind to us, and I really enjoyed those experiences.  My daughter did, too.  They didn’t involve any pay, so I didn’t need to worry about working out financial concerns with agents and overall, which helped in my decision whether or not to submit.  When I discussed extra work, I said it might not come with the type of experience that can make your child a better actor (and some of you disagreed and shared experiences that were beneficial to their kids, and that’s cool too – but you know my opinion on the subject).  These WERE experiences that were beneficial to my daughter learning to take direction, be patient, and persevere.

If you don’t have agents, self-submissions are probably your only way to get into the business.  And the following advice can apply to everyone.

My general opinion on self-submission is this: beware.  I often think there is a reason things are open to self-submit and not (necessarily) going through agencies.  Sometimes totally legitimate projects are looking for really specific people that agencies might not be able to find: unicycling skateboarders with punk-rock looks might be too specific for agents to find, so casting is casting (tee hee) a wider net in hopes of finding that specific person.

But, often, there may be something to the job that agents aren’t really going to like.  Let me post one that I screen-shot for you to examine.  Can you see anything here that an agent wouldn’t like? 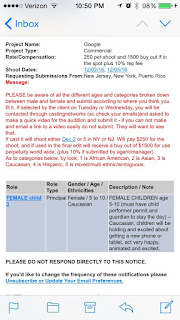 The first thing that may jump out at you is the rate.  The range is WAY off.  $250 for a commercial session fee is WAY below the going SAG rate.  It’s about $100 more than an extra rate for a TV program, but about $350 less than the going session fee for a SAG commercial principal.  If your child would be on set for more than 2 hours, that rate pays less than print.  And that’s ridiculous for a “commercial.”  Anyone can look up the SAG rates to make comparisons between what these breakdowns offer versus industry standards.

Are you thinking, “But what about that buyout fee?”  It’s still SIGNIFICANTLY lower (and I mean, lower by like FIVE FIGURES) than what a national SAG commercial could gross for your child.  That alone is really suspect.  AND, how many kids might they shoot?  Two?  Twenty?  What are your chances of ACTUALLY getting the buyout fee?  What’s going on here, I’m wondering?  It just doesn’t sound like a commercial for a tech giant with oodles to spend on their advertising – something like that would usually go through a major agency, be SAG, and… show all of that in its pay.  Google is not a mom-and-pop local shop looking to buy some time on cable channels to try and expand their business.  This is a HUGE red flag.  Now, you may not know all of this if you are new to the business – but that’s why I’m here, right?  This must be something like a spec-commercial, which an independent group may be doing to try to pitch to Google to get their attention and hopefully maybe somehow convince them to use the commercial or use their agency.

But there is an even worse problem with this project.  And it’s really a potential deal-breaker for future jobs for your child.  Really GOOD future jobs, like the ones I described above – that a real Google commercial should be.

Can you find it?

Tech companies – and pharma companies, I’ll add – usually demand exclusivity.  That means your child could not appear in ANY ads, print or commercial, for another tech company for… PERPETUITY.  Forever.  That is what’s called a conflict, and a company does not want your child to be a face of some product and… also their product.  They see your child and is it for Samsung or LG?  No.  They want consumers to associate the visuals with their product and their product alone.  If your child was pitching a tablet two weeks ago, the next tablet company would not want anything to do with your child for a long time.  You know that guy who is in the cell phone commercials saying, “Can you hear me now?”  Why did he show up now for some other wireless company?  He is no longer under the terms of his conflict.  DO YOU HAVE ANY IDEA HOW MUCH MONEY THAT GUY EARNED… and now earns AGAIN by being in that second campaign?  I’m going to guess no less than seven figures.  (If anyone knows the guy and I’m wrong, please correct me…but if I’m wrong, it’s probably closer to eight figures than six.)

A SAG commercial is going to pay actors in 13-week segments.  And maybe even DOUBLE scale if it’s a product that would demand exclusivity for usage.  And they need to keep paying you in 13-week segments while that commercial airs.  AND another tech company won't even want an actor for a period of time (like one to three years) beyond the time the commercial airs.  That’s often why a project might pay double scale – they know that their ad would limit earning opportunities for similar projects.

My daughter made it to the commercial and print callbacks (same ad campaign but two different casting directors) for a major tech company a few years ago.  The commercial would have paid double SAG scale and the print had a payout of – wait for it -- $30,000.

Can you see why I wouldn’t touch that particular self-submit with a ten-foot pole?  Or a hundred-foot pole?  (Sorry for the cliché – it seems like that kind of day in my world.  I’m sitting on my couch in my PJs writing a mommy-blog with Real Housewives on in the background.  If that’s not a cliché, I don’t know what is.)

Bottom line: my advice for self-submits is this:  BEWARE.  Scrutinize the terms.  Back to what I said before: there is probably a reason why this is not going through agents.  Keep your self-submissions to the guidelines of your agent, if you have one, and really, really, really consider what’s probably wrong with the project.

Thanks for reading!  Check out my Instagram @thebizzymama, email me at theBizzyMama@gmail.com and like my Facebook page (The Bizzy Mama) to know when I make new posts.  I also share these posts on the Backstage forums if you want to comment there.  Happy holidays and bring on 2017!
Posted by Mama Di at 9:32 AM